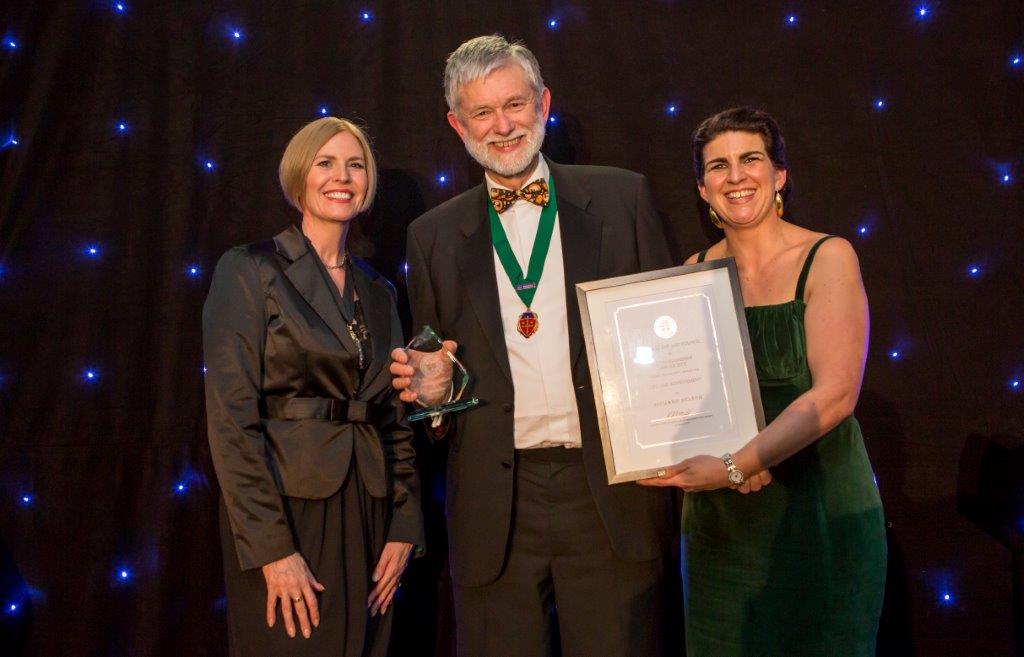 Nottinghamshire law society has honoured one of the city’s leading solicitors. Richard Nelson was presented with a lifetime achievement award at the Society’s annual dinner held this year at Nottingham Trent University.

In announcing the award the President Kathryn Meir referred to his involvement in the creation of two successful firms and his contribution to the profession as well as to his clients. His current firm Richard Nelson LLP offers legal services from seven office locations around England and Wales as well as having consultants based in a number of other towns and cities across the country.

Richard’s own area of practice is in professional disciplinary work and the defence of alleged financial crime but the firm has expanded to offer a wider range of services to the private and corporate client.

Richard has had a national reputation for many years and has been identified as a leader in the field from the inception of the legal directories over 20 years ago.

He has led teams of lawyers in cases involving millions of pages of documents and in a case where the material was referred to in tons rather than by page count. He has recently been involved on behalf of clients in what has become the leading case on the question of integrity in professional conduct and he has advised and represented individuals and companies facing issues where they suspect or are suspected of illegal conduct.

He represents and/or advises other solicitors on management issues and conduct issues relating to their firms their staff or themselves and he was instrumental in establishing and funding with two others a company to provide free initial legal advice, guidance, and support to lawyers and their families. He was also a founder of the Lawyers Defence Group. He has been involved in law society working parties and on advisory groups as well as representative groups such as the Serious Fraud Association and the Complex Case Practitioners Group.

Alongside his practice he continues to be involved in private companies and was formerly a school governor and previously vice chairman of the Nottinghamshire Hospice.

He is no stranger to awards, having previously been recognised by the Society for his pro bono contribution to the profession and, shortly after he set up his current firm, as sole practitioner of the year.

He has a number of awards from various national and international publications and has been recognised several times as UK solicitor of the year in the field of regulatory defence and as leading UK solicitor in criminal defence both of which are current. His firm has again this year been awarded the title of UK Defence Law Firm of the Year.

Much of his work and successes goes unpublicised to respect the interests of his clients. Most of his own work comes by way of referral from other solicitors and other professionals in recognition of his ability not only to conduct the defence, but also to empathise with and understand the needs of his clients many of whom are suffering from the stressful circumstances in which they find themselves.

He is the first to point out that none of this would be possible without the tremendous support that has been provided by his family and colleagues. When asked about the secret of his success he is quick to say that his key ability has been to surround himself with competent, expert, and committed work colleagues. They, in turn, have been happy to support him and to further their skills through observation and involvement.

As for the future and in response to the often asked question Richard has no plans to retire. He continues to find his work rewarding as well as challenging and enjoys the company of his colleagues at work. Their support enables him to pursue his wide range of activities. He often says that as a schizophrenic Gemini there are four of him so there’s always a good chance that one of him will be able to enjoy any given moment!

On a final note he confirms that this award has been particularly special as it represents the respect of his fellow professionals and colleagues.