Richard Nelson LLP surveyed 500 British adults in full-time employment in order to gain insight into their attitudes towards social media and its relationship with their professional lives. This report includes data on how people use social media to interact with their workplace and colleagues, their views on privacy and the clarity of employers’ social media policies.

The survey was conducted by Richard Nelson LLP, a British law firm with specialisms in employment law and professional disciplinary cases. It was inspired by recent cases that they have been involved in that included social media usage as a key point of contention. In addition, recent news stories involving high profile missteps on social platforms ensure an ongoing public interest in the topic.

The survey drew 500 responses when it was launched in September 2018.

Below is a full record of our findings from 10 survey questions, followed by expert commentary from our employment solicitors.

When asked, “Do you ever talk about work on Facebook, public Twitter profiles or other social media channels?” the results were close. 53% of respondents (267 people) said that they do. This figure rose to 63% of millennials (respondents aged 18-35). 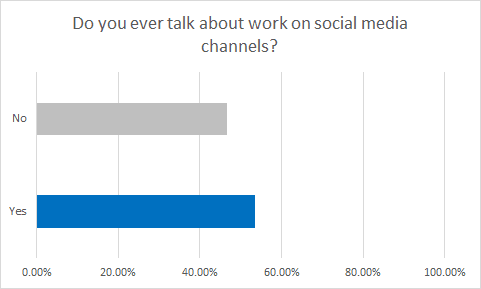 Q2. Is your workplace common knowledge?

The majority of our respondents said that their friends and followers on social media know who they work for. 69% of people responded ‘yes’ to our question (344 people). 12% of people (60) said that they don’t know. 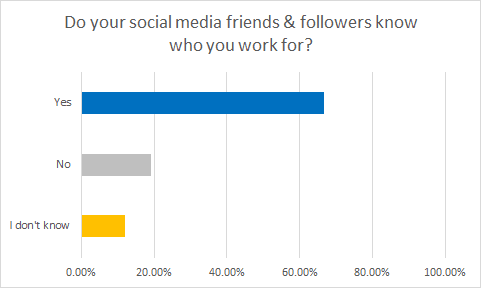 Q3. Photos related to the workplace

Survey respondents were then asked if they “have ever taken photos of yourself at work or in your work uniform and posted them on social media or messaging services?” 37% of people (185 respondents) said that they had. This percentage rises to almost half (46%) for our millennial respondents. 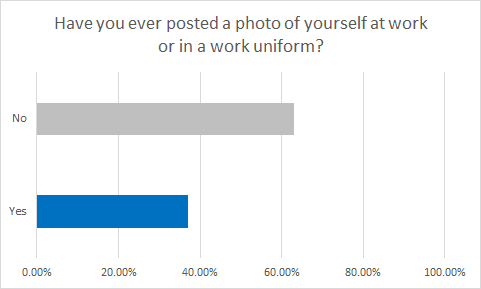 The vast majority of people are friends with some or all of their work colleagues on Facebook. 405 respondents (81%) answered ‘yes’ to this question. Once again, the percentage is higher for millennials: 89%. This suggests that younger people are more inclined to blur the lines between their professional and private lives. 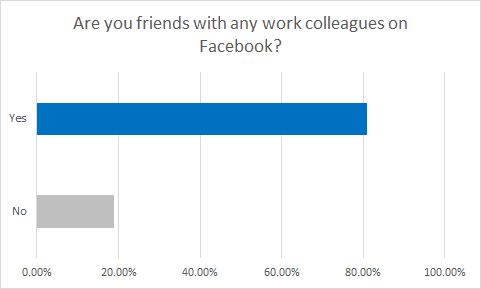 The willingness to befriend colleagues and talk about work could be due to our respondents’ attitude to privacy on Facebook. 86% of all our respondents (429) believed that their Facebook profile was either completely private or somewhat private. Only 4% of people believed that their content is always available “one way or another,” which is closer to the legal reality. 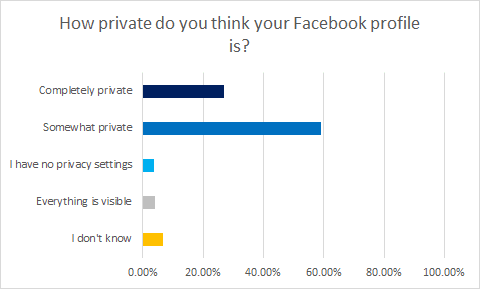 We also wanted to learn more about social media use and regulation in the workplace. When asked, “Does your workplace have a social media policy?” 63% of respondents answered in the affirmative, though not all of these had read it. That left over a third of respondents who said that their workplace did not have a policy, or that they didn’t know either way. 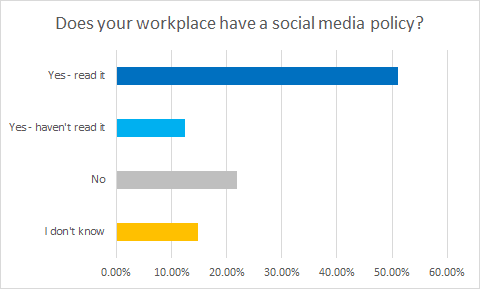 Q7. Clarity regarding social media use

Despite the majority of participants confirming that their workplace did have a social media policy, almost half (248 out of 500) believed that their employer could do more to make their expectations regarding social media clear. Only 29% of people answered ‘no,’ while 23% weren’t sure. 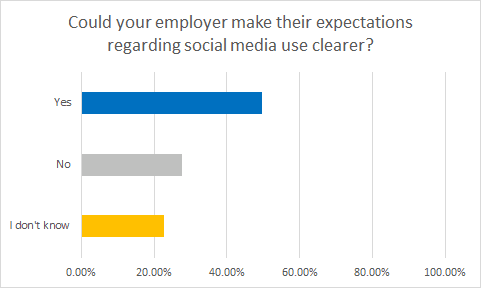 We asked participants to tick all of the social media platforms that they have used for personal reasons during work hours. Unsurprisingly, Facebook (71%) was the most popular platform, with Whatsapp (56%), Instagram (37%) and Twitter (32%) following. 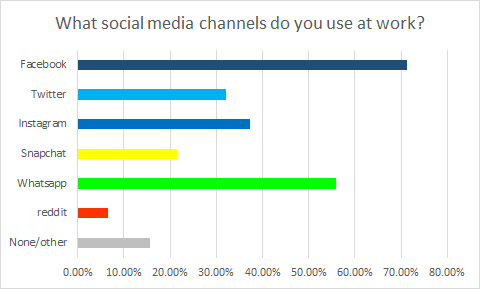 This question got at a closer link between work and online social activity. The majority of people (73%) kept their work email account and their personal life separate, but 133 people (27%) admitted to using their work email for their own reasons. 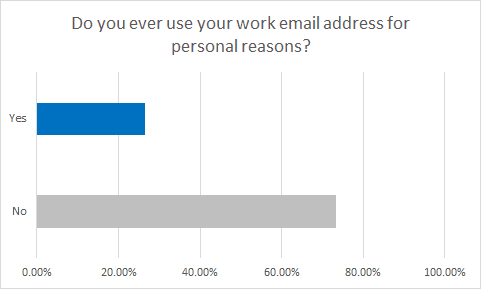 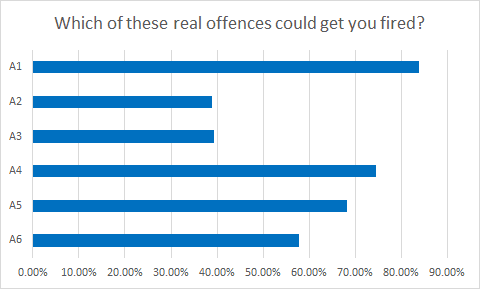 On the risks of befriending colleagues on social media:
“If you have colleagues as friends on Facebook, then if, in an unguarded moment, you do post something you later regret – like a derogatory comment about your employer, or something that allegedly brings your profession into disrepute – you are more likely to be caught and reported to your employer or regulatory body if colleagues see it. It may even be the case, depending on what is written, that your colleagues are under a contractual or professional obligation to report what they have seen.” 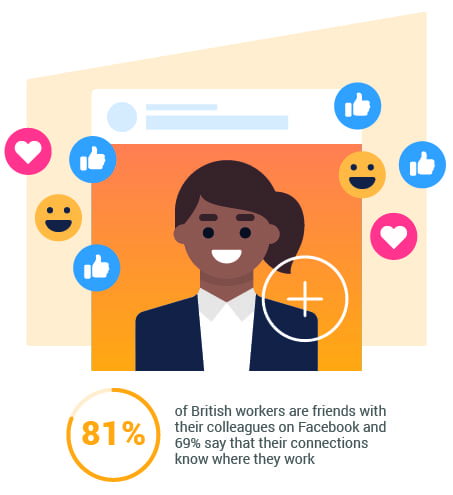 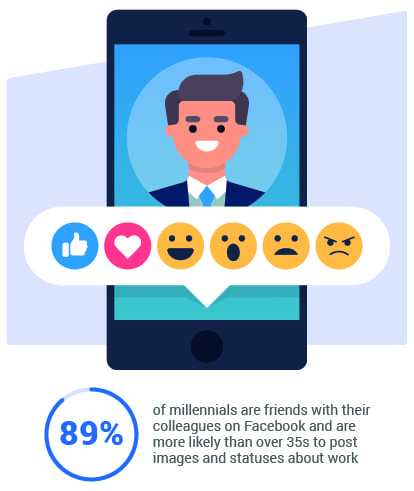 “Although the social media post may have been made in a private and non-work-related capacity, that is not always relevant. The regulators regulate the professional as a person, which includes their conduct outside of a work environment. For example, if a solicitor makes comments on a personal social media account, which are unrelated to their work, then they can still be disciplined by the Solicitors Regulatory Authority and struck off the roll of solicitors. This means that they are no longer entitled to call themselves a solicitor.

“Examples of this include when professionals have made racist or homophobic comments, which the SRA then alleged brought the profession into disrepute and undermined public confidence in the profession. This is particularly the case if the person’s social media profile makes it clear that they are a member of a particular profession.”

On social media use that could be considered to damage an employer’s reputation:
“Examples include where an individual is wearing a uniform, identifying their employer or profession and is seen on social media behaving in a manner which is regarded as inappropriate by their employer. For example, a paramedic getting drunk in their uniform may undermine public confidence and even place members of the public at risk if, for example, they needed emergency assistance, spotted the uniform and sought help. However, the paramedic may not be in the best position to provide that help.

“Also, if an employee criticises their employer on social media, then that may damage the organisation’s reputation or the employee might be in danger of breaching confidentiality. For example, if a healthcare professional refers to a patient or client of their employer on social media, then such a breach of confidentiality would be considered damaging for an employer’s reputation. Breaches of confidentiality are taken really seriously by regulatory bodies, more now than ever post-GDPR.”

“Employers also need to consider the use of social use at any time, including outside office hours, and regardless of whether they use the employer’s equipment to access social media.

“The publication and implementation of a specific social media policy will set clear parameters about permitted use. An employer should also consider training staff about social media and the policy they have drafted. In particular, employers should draw to employees’ attention that anything they post is, in fact, public, and the consequences that can flow from online behaviour.” 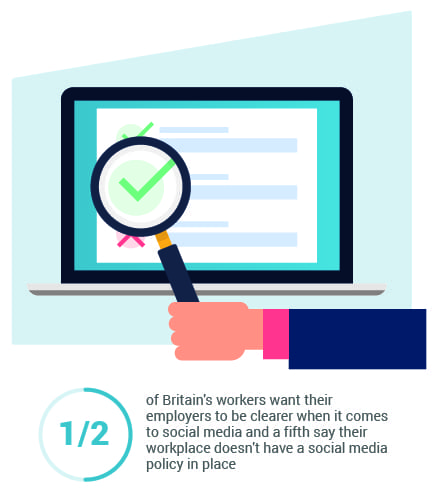 On employees’ right to privacy
“It would be a mistake for an employer to assume that just because the information is publicly available, the employee has no right to privacy. In Pay v United Kingdom, Pay did not lose his right to privacy when engaging in sadomasochistic activities in a private club ([2009] 1RLR 139). Photographs of those activities were then posted on the internet. Pay was wearing a mask and had not authorised the photographs to be posted online.

“Although Pay was engaging in these activities in a public context, Article 8 of the Convention still applied. However, on the facts of the case, the European Court of Human Rights found that Pay owed a duty of “loyalty, reserve and discretion” to his employer. Pay’s dismissal was proportionate because of the nature of his role as a probation officer dealing with sexual offenders.

“In most employment contexts, the real question will be whether it is proportionate and therefore fair to dismiss an employee for what has been done or reported online rather than whether the employee has retained his or her right to privacy. Pay sets a low bar for the employer seeking to justify dismissal where there is some connection with the employee’s role.”

On the difficulty of ascertaining what constitutes damage to an employer’s reputation:
“Often, the employer’s main concern is to protect its reputation, but damage can be speculative and difficult to substantiate. Furthermore, the employee may be using his own equipment in his own time. In Taylor v Somerfield (unreported), the claimant had posted a video on YouTube showing two of his colleagues hitting each other with plastic bags and was dismissed for bringing Somerfield into disrepute. The Tribunal did not accept that there were sufficient grounds for dismissal: it was influenced by the fact that there were only eight hits on the video clip and no loss caused to the employer.

“However in Crisp v Apple Retail (UK) Ltd ET/1500258/11 it was critical to the Tribunal’s decision that Apple had made clear in its policies and training materials that protecting its image was a “core value” and had drawn attention to the fact that making derogatory comments in social media was likely to constitute gross misconduct.

“The decisions in cases involving employees in use of social media outside work suggest that: 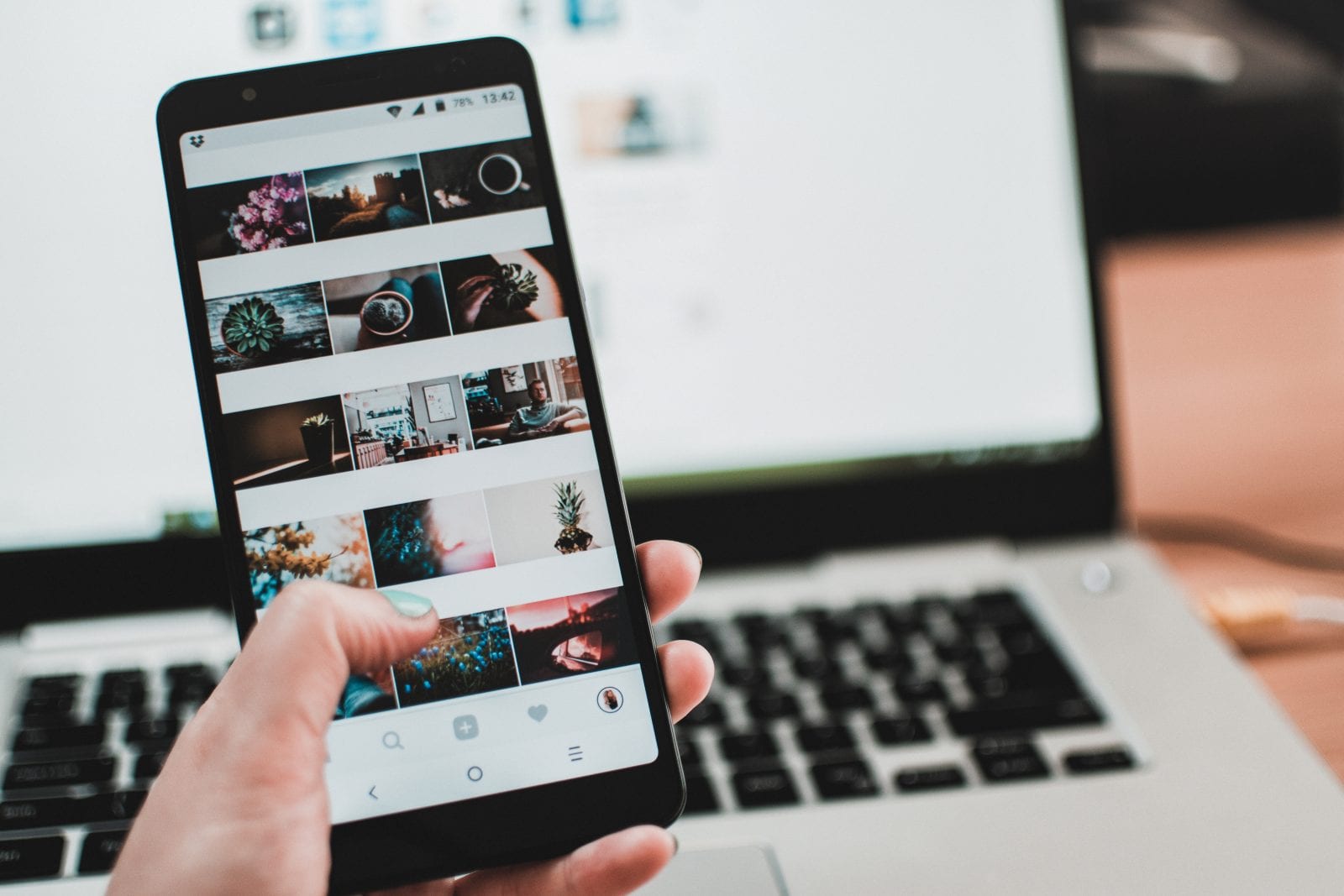